What made The Economist’s (TE) P.F., or Patric Foulis, the ‘supposed author of the TE blog ‘I give you Narendra Modi’* foul so Miserably?

Who made make understand that by doing so he has exposed himself only?

This racist article dents his and TE’s journalistic credentials only.

The article, written in poor taste, and with dominant elements of bias, reflects nothing but a personal grudge.

Did Narendra Modi deny his requests for interview when he was in India on his professional assignment?

Tweets from his Twitter handle @PatrickFoulis during Modi’s Madison Square Garden event only corroborate it.

Here are the gems that reflect on the skewed wisdom.

@PatrickFoulis • Sep 28
Huge roar as Modi mocks Indian politicians obsession with legislation over action. Promises a bonfire of old laws. “I will destroy them all”

@PatrickFoulis • Sep 28
Amid the propaganda Modi reminds the audience of India’s shame: “the poorest of the poor are asking how much longer can we live like this?” 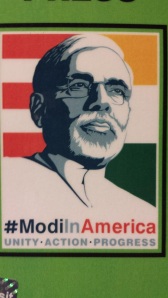 These tweets are certainly biased and reek of some long kept prejudice. On any other day, some of these could have qualified as random journalistic observations, but in the context of this ill-conceived blog, each of them put Mr. P.F. squarely in the dock.

Pity him, for even the land of Barack Obama couldn’t change his outlook, even if he moved from Mumbai to New York City.

And for a magazine of eminence like The Economist, it is equally pathetic. First, they should never have done it, for any person on the street cannot get his/her blog write-up published on any TE platform, and that too, when it is so biased and controversial. Probably, coming from a senior journalist from with TE ranks, the blog went unnoticed (just a wild surmise) while it was uploaded.

Now, once it was done, there were only two ways out. Either TE had to withdraw it or had to stick to its viewpoint and content in entirety.

Pathetically they couldn’t do either of the two. Instead, they added this note to the end of the blogpost that only diluted the gravity of the platform:

Editor’s note: The second sentence of this blog post was changed on September 29th to make clear that The Economist does not consider Mr Modi to be a “pain in the ass”; that epithet is merely how we imagined an uninformed New Yorker might feel about someone who causes a traffic jam.

Pity Mr. P.F. that Mr. Modi still stands tall in the US and is enjoying a greater attention while you made TE lose some hard-earned points on the ‘journalistic credibility scale’ so easily.

Why this foul intent – what made you react so personally?

Error: Twitter did not respond. Please wait a few minutes and refresh this page.