Mumbai’s Bakra Bazars, or for any matter, of any other place, are a common feature during the festival of Eid al-Adha or the Feast of Sacrifice, a major Muslim Festival.

While visiting Mumbai’s Mumbadevi temple, which is located in a densely populated area of lanes, houses and markets, one will come across such hoards of goats (the main animal for sacrifice) as this photograph says.

Mumbadevi area has over 50 percent Muslim population and the alleys all around the temple have a mix population of shops owned by Hindus and Muslims. If you will find goats herded up for sacrifice here, you will also find the Ganpati idols and Mandaps (make shift pavilions) in every other lane. 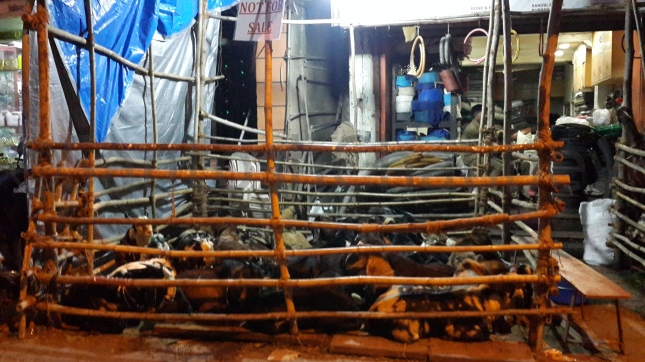 Though the ritual of sacrificing animals is increasingly being criticized, it is still the norm.

Here, in this image, we can see how many goats are rounded up and chained in a makeshift camp. A ‘not for sale’ marker is hanging prominently that shows the animals are specifically for September 13 sacrifice and not for routine sale.