Natural disasters cost the United States $306 billion in 2017 says the country’s scientific agency National Oceanographic and Atmospheric Administration (NOAA), making it the costliest year for natural disasters in US history.

2017 has been a year of extreme weather events in the US, including hurricanes, wildfires, floods, tornadoes, drought and freezes and the wildfire season is expected to continue in 2018 as well.

The assessment released by NOAA for 2017 says the US experienced 16 weather and climate disasters, with each of them costing more than $1 billion. 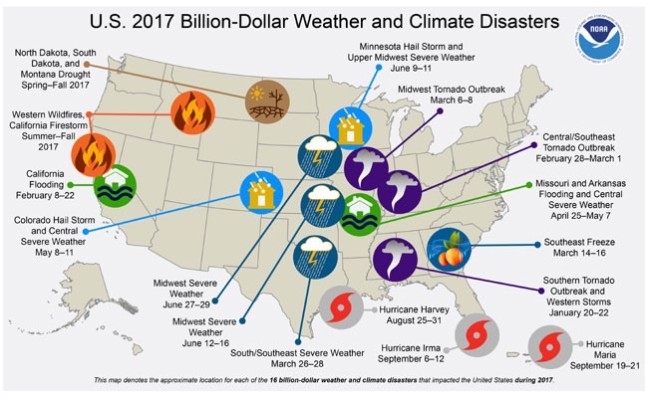 The ongoing wildfire season in many western US states has caused dozens of wildfires in the country and their smoke has been visible from the space. They so far have cost $18 billion in damages. 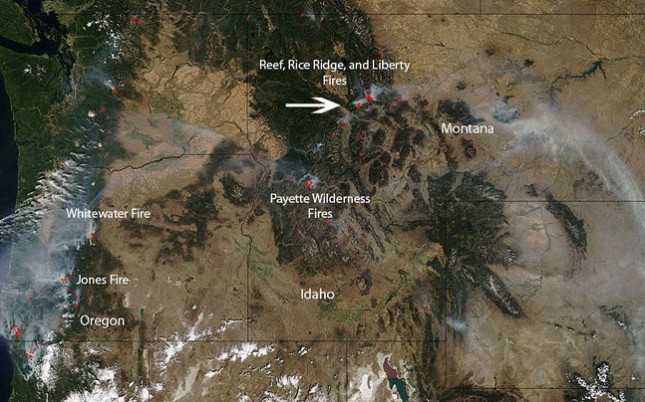 This satellite image shows the wildfires that took place in US in 2017. (Photocourtesy: NASA)

But the three hurricanes cost the US most in damages, totalling around $265 billion with Hurricane Harvey becoming the costliest hurricane in US history in terms of the destruction it wreaked.

Hurricane Harvey lashed many states of the US in August, caused widespread flooding and displaced thousands.

NOAA estimates say the hurricane cost $125 billion, $17 billion more than the cost of estimated damage by Hurricane Katrina in 2005 that had inundated 80 per cent of New Orleans.

Hurricane Maria that made landfall in September cost US $90 billion, becoming the third costliest hurricane in US history.

Hurricane Irma, that just followed Hurricane Harvey, cost the US $50 billion, the fifth costliest in US history of natural disasters, the NOAA assessment says.

Like 2017, the 2005 hurricane season including Katrina had left huge destruction behind killing over 1,000 people.

Information from the US National Hurricane Centre shows Dennis, Cindy, Ophelia, Rita, Wilma were other hurricanes of the season that cost US $211.2 billion.

But the deadliest hurricane season in US history has been 1,900 when Galveston killed 8,000 people and caused damage worth $104.3 billion.

Since then, advances made in predicting hurricanes and in fact, other weather phenomenon, have been able to reduce loss of lives to a greater extent as evident from the 2017 hurricane season, which though caused second most widespread damage in US history, the human cost was limited to 103 deaths.