The article originally appeared on DailyO.

After Delhi, the Aam Aadmi Party (AAP) is eyeing Punjab and Goa, the two states where polls are slated within the next six months. The party would want to approach the voters of these two states with the image that gave it a resounding victory in the February 2015 Delhi Assembly polls, in which it won 67 out of the 70 seats.

At that time, the Arvind Kejriwal-led party could successfully present itself as a viable alternative to the BJP and Congress, the two main political parties of Delhi before the advent of the AAP – a party rooted in an anti-corruption movement, with claims that it is a humble party of the common people and for the common people.

But the first 18 months since February 2015, when the second AAP government in Delhi was sworn in, have seen a flurry of controversies.

Its MLAs and ministers have been accused of impropriety, immorality and corruption. Now no one in the AAP talks of making sting videos of corrupt officials. Kejriwal and his party leaders have stopped harping on their anti-VIP stance.

They have comfortably settled down in the lavish bungalows allotted to them while during the first term of the AAP government in 2013-’14, it was a big issue and Kejriwal had refused to accept a bungalow as his official residence. The AAP leaders and ministers have been alleged of having fake degrees, of taking bribes and high-handedness in public life.

So much for the AAP going to the Punjab and Goa voters with a clean image.

Punjab has seen successive governments of the Congress and the BJP-SAD combine. The state has politicians with serious corruption and criminal charges against them. Corruption and political patronage of the drug menace in the state are the major election issues this time around.

Goa has the same story – state governments alternating between the Congress and the BJP. Goa, too, has politicians and ministers with serious criminal and corruption charges against them. Corruption and drug abuse are major electoral issues here too.

The AAP sees a chance in both these states. It would stand to gain if it could make the people of these states believe that it is a viable alternative to the Congress and BJP as it did in Delhi.

And so, the party will look to effect a course correction. The party has a strong position on corruption and impropriety and the recent purges should be seen in this context.

Delhi’s social justice and women and child development minister Sandeep Kumar is the second senior AAP leader the party has purged in the recent days after the party’s Punjab chief Sucha Singh Chhotepur. Chhotepur was removed as the AAP’s Punjab convener last week after a video clip surfaced showing him accepting money for allotting tickets.

Kumar was sacked on August 31 after a CD surfaced allegedly showing him in compromising position with a woman.

Both Chhotepur and Kumar have tried to play the victim card. Chhotepur said he would not leave the AAP on his own as the clip was a conspiracy to defame him. Kumar said he was not in the clip and he was being targeted because he was a Dalit.

Truth will only come out after a thorough probe but Kejriwal has taken a hard line, saying that Kumar has betrayed “the AAP movement”. This is how the Delhi CM reacted on Twitter after he came to know of the allegations against Kumar: 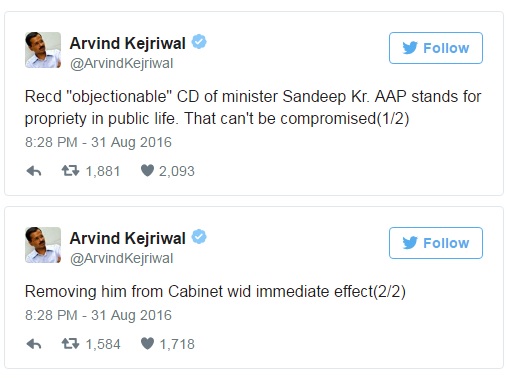 The important thing is the message such acts by the party chief convey – messages that the AAP would like to drive home, something that the party tries to do after every such incident, as it did after the sacking another cabinet minister of Delhi, Asim Ahmed Khan, on corruption allegations in October 2015. That message is: the AAP follows zero intolerance to corruption as a founding policy and dares others to do so.

Our political culture has been that parties seldom act on corruption allegations on their leaders, even if several court cases are lodged against them. People facing allegations of corruption, rape and murder are made ministers. A conscious voter never likes it, whether he is from the lower stratum of the society or from the elite class. The same consciousness of the voters handed the AAP its massive victory in Delhi.

The AAP is trying to send the same message to the voters in Punjab and Goa as well because the party knows the advantage that it has – the controversies associated with it in Delhi can easily be played down when seen in comparison with controversies associated with the Congress and BJP leaders in Goa, and the Congress and SAD-BJP leaders in Punjab.